skip to main | skip to sidebar

Posted by R Parimala Bai at 9:57 PM No comments:

Posted by R Parimala Bai at 9:55 PM No comments: 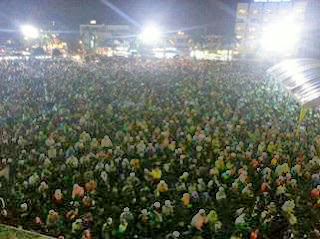 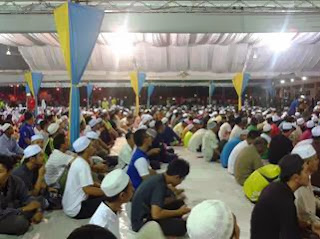 RG2011... Umno Selangor threatens to protest over use of 'Allah' by non-Muslims

"We have to be firm and cannot condone this. His actions are rude and we want him to apologise to all Muslims," Umno Kota Raja division chief Kamaruzzaman Johari said in the Malay language daily.

"Looking at His Majesty's decree, it is clearly meant to ensure the harmony of all races and religion in Selangor," he said.

In an interview last week, newly appointed director of Jais Ahmad Zaharin Mohd Saad said the state religious authorities would draw up a list of Selangor churches before writing to ask them to comply with the Selangor Non-Islamic Religions (Control of Propagation Among Muslims) Enactment 1988.

“We will write to all the churches in Selangor to respect the law that is in force in relation to this,” he was quoted as saying.

The enactment, which was passed by the Barisan Nasional state government, prohibits non-Muslims in Selangor from using 35 Arabic words and phrases, including “Allah”, “Nabi” (prophet), “Injil” (gospel) and “Insya'Allah” (God willing).

However, lawyers had challenged the move, saying that it was unconstitutional.

The latest to do so is the Catholic Lawyers' Society. Its president, Viola De Cruz Silva, said today there were no provisions in the Federal Constitution banning non-Muslims from propagating their religion in their community or to other non-Muslim communities or groups.

"Therefore, any intended letter from Jais to the churches in Selangor would be invalid," she said in a statement.

Malaysian Consultative Council of Buddhism, Christianity, Hinduism, Sikkhism and Taoism (MCCBCHST) president Jagir Singh said the 2009 decision by High Court judge Datuk Lau Bee Lan ruled that non-Muslims could use words like “Allah” provided it was confined to their own religious groups.

“It is only an offence by non-Muslims to use such words to propagate their religion to Muslims,” he had told The Malaysian Insider. – January 1, 2014. 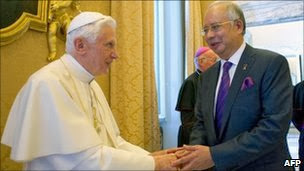 The Vatican and Malaysia have agreed to establish diplomatic ties, following a meeting between Pope Benedict XVI and Malaysian Prime Minister Najib Razak.

The move comes after years of talks between the Catholic Church and the government of majority-Muslim Malaysia.

Mr Najib's visit was said to have been intended to reassure Christians in his country, who have long complained of discrimination.

Ethnic and religious tensions have risen ahead of expected national polls.

On Monday Mr Najib met the Pope at his summer home near Rome.

In a statement, the Vatican said that during their "cordial conversations, the positive developments in bilateral relations were discussed and an agreement was reached to establish diplomatic relations between Malaysia and the Holy See".

The Vatican said the two leaders had also discussed the importance of cultural and religious dialogue for the promotion of peace, Associated Press news agency reports.

Mr Najib's meeting with the Pope is significant for Malaysia's Christian community, which makes up about 9% of the population.

Malaysia's constitution promises freedom of worship to all faiths, but a string of religious disputes in recent years has raised fears among the country's religious minorities that their rights are being eroded, says the BBC's Kuala Lumpur correspondent Jennifer Pak.

Who Are the Sabians?

Posted by akupun • In Uncategorised 2

Those who believe (in the Qur'an), and those who follow the Jewish (scriptures), and the Christians and the Sabians,- any who believe in Allah and the Last Day, and work righteousness, shall have their reward with their Lord; on them shall be no fear, nor shall they grieve.2:62-Yusof Ali.

There are two other verses in the Qur'an where the Sabians are mentioned:

[Surely, those who believe, and those who are the Jews and the Sabians and the Christians, whosoever believed in Allah and the Last Day, and worked righteousness, on them shall be no fear, nor shall they grieve.] (Al-Ma'idah 5:69)

[Those who believe, those who follow the Jewish (scriptures), and the Sabians, Christians, Magians, and Polytheists,- Allah will judge between them on the Day of Judgment: For Allah is witness of all things.] (Al-Hajj 22:17)

In all these verses, the Qur'an mentions the Sabians together with Jews and Christians.  Nothing is said about their religion, presumably because the Arabs of the Prophet's time already knew them as a religious group.

This is deducible from the fact that the Prophet's contemporaries, who queried him on almost everything in the Qur'an, were silent on the Sabians.

All evidence points to the idea that the Sabians of the Qur'an were the Mandaeans of southern Iraq (Gündüz, 28-29). We know that the Mandaeans had been living in this area since the second century of the Christian era.

Their beliefs and cults have many similarities to Judaism, Christianity, and Zoroastrianism, the adherents of which are referred to in the Qur'an as the Majus, and carry various elements from these religious traditions (Gündüz, 28-29).

In the early Islamic period there was little scope for confusion about the identification of the Sabians, unlike in later sources. It is true that there are some differences between these scholars on some characteristics of the Sabians, but there is a common opinion about who the Sabians were and what the chief features of their religion were.

It was in the Abbasid period that speculations arose on the Sabians around the claim that they followed the planet cult of ancient Mesopotamia. From this period onwards, most scholars have seen a special connection between the term Sabians and the pagans of Harran, which was an ancient city of strategic importance and is now a village in south eastern Turkey.

The characteristic features of the Harranians, like polytheism and star and idol worship, have therefore been ascribed to the Sabians too. This is at variance with the views of the early scholars since they never mentioned polytheism or idol worship while describing the Sabians.

However, the later Muslim writers as well as the Jewish scholar Maimonides called the Harranians "the Sabians from Harran" (315-320).

As a Gnostic community, the Mandaeans were an obscure religious group. Gnosticism, according to the Oxford Concise Dictionary of World Religions, is "a complex of religious movements, having at least some of its roots in Jewish and pagan thought but appearing in developed form as a Christian heresy in the 2nd cent." (212).

The Mandaeans followed a policy of secrecy and isolation from the rest of the society. Their religion forbade them to reveal their secret beliefs and modes of worship to a non-believer. Revealing the secrets of the religion to an outsider was considered a sin.

When talking to people of another faith, they usually stressed small points of similarity between their beliefs and those of their audience. This limited information given by them was not enough for others to have a clear idea of their religious tradition. For this reason, guesswork on their belief system and practices became inevitable (Drower).

The Qur'an verses referred to above place Jews, Christians, and Sabians alongside Muslims, and say that any one among them who [believes in Allah and the Last Day and does righteous deeds shall have their reward with their Lord, on them shall be no fear, nor shall they grieve.]

For a proper understanding, these verses must be read in conjunction with another verse:

[And whoever seeks a religion other than Islam, it will never be accepted of him, and in the hereafter he will be one of the losers.] (Aal `Imran 3:85)

Although the cited verses seem to be incongruous, it should be noted that there are two meanings for "Islam." First, there is the essential Islam (submission to God) as the religion of all the prophets from Adam to Muhammad (peace be upon them all). Second, there is the completed religion or more accurately, way of life of Islam taught by Prophet Muhammad (peace be upon him).

The verse quoted above refers to the essential Islam and not the completed Islam; and so there is no contradiction between the verses. That is to say, in the verses mentioning the Sabians, the Qur'an refers to those who follow the fundamental "religion" of living in obedience to the commandments of God as taught by Moses, Jesus, or any other prophet of God.

There is currently a religious group in Iraq called the Mandaeans. Although not much is known about them as they are very few, they may be the last remaining followers of the Sabian religion today. 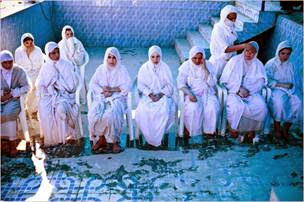 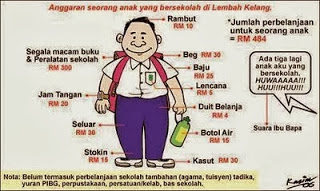 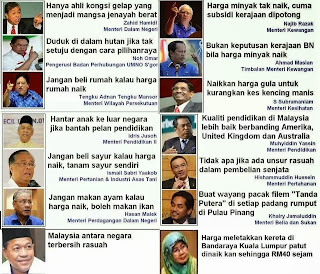 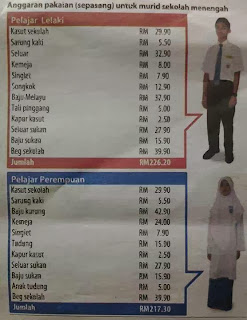 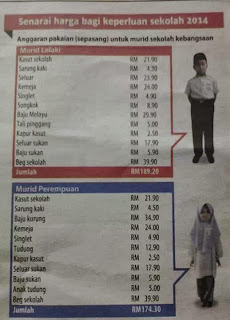